Alex Kosh was born in the Ukraine and graduated from the Ukrainian National Academy of Arts.
He moved to London in 1999. His works range from graphics to frescos, mosaics and stained glass, including stained glass windows for the Kiev Pechersk Lavra Museum of Historical Treasures and Jewels in Kiev. He participated in more than 20 exhibitions in the former Soviet Union ( Russia and Ukraine) and his work has often been featured in major Ukrainian magazines.

Alex Kosh’s exhibitions in London range from one-man show in Burgh House to Conningsby and Highgate Contemporary Art Gallery.
Oil and acrylic works can be found in private collections in Switzerland, USA, Germany, Austria, Russia, Spain, Canada, Ukraine and in the UK.

Pictures at an Exhibition

The Chandelier of Damocles 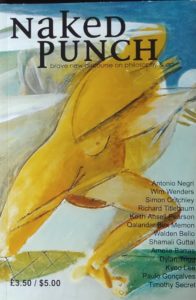 The division of an artist’s oeuvre into different periods of phases is a favourite pastime of art historians and cultural critics. More often than not, these divisions seem to exist solely to allow the critic to blur the boundaries between each phase – thus neatly demonstrating both the ability of art to elude categorisation and the critic’s ironic subtlety of judgement. But when faced with such momentous shifts as those encountered in the work and life of Ukrainian artist Alex Kosh, such an exercise can no longer simply consist of such rarefied posturing.

Kosh was born in the Ukraine in 1956. From his graduation from the National Ukrainian Academy of Art in the mid-seventies, Kosh was in demand to produce ‘monumental’ work for the state – such as murals and stained-glass windows. He was fishing on the ‘right side’ a few miles away of Chernobyl in 1986.  Having endured a ‘dark’ period following the 1989 fall – during which, in his own words, ‘there was absolutely no interest in art for several years’ – he settled in London in 1998. A failed operation on his hip following a horrific boyhood fall left him in incessant pain from 1971 to 2004, when it was finally put right in the UK.

And yet Kosh is sanguine. His work of the last few years consistently shows an unforced humanism and wit: the work of experience finally finding its balance. His self-portrait of 1999, ‘The Portrait of the Artist’, shows Kosh with a sardonic, knowing expression as if calmly appraising the period of his life covered by the eponymous Joyce reference. Kosh uses the metaphor of nutrition, of ‘art as organism’ to describe this happy departure and balance in his work in England. Another excellent example of Kosh’s calmly contemplative yet witty style is ‘The Regular’, an acrylic composition of 2000. This work pay tribute to a hidden memory of Chernobyl – the huge quantities of red wine that the population were told to drink ‘to keep up their strength’, and the resulting widespread public drunkenness. A figure with its head inverted into its body, arms folded, sits by a newspaper and a glass of wine. The head is inverted, perhaps, not from shock from the disaster, but from a crashing hangover. Another aspect of his contemporary work that is immediately apparent is its easy sensuality – the pastel colours and lazy lines of such works as ‘The Woman in the Hammock’ (2001) and ‘Dream’ (2003) glory, Kundera-like, in the escape of an embrace. ‘This is not a Pear’ (2003) playfully evinces the female form in the shape of a pear, half green, half yellow, sitting on a chair, with a corner of pink drapery nestling suggestively in the top left-hand corner of the canvas. This composition also exhibits the tendency of Kosh’s work to blend human form and inanimate objects into one, multi-faceted shape.

Another work that uses this morphing technique is ‘Self-Portrait with propaganda’ (1995). But this is a very different Kosh to the creator of the witty and sensual world of pears, dreams and hammocks one sees after 1998; radically different, too, to Kosh as we see him in the self-portrait discussed above. Here one side of the artist’s head appears semi-naturalistically and angular, with a searching eye and expressionless lips. On the other, a grotesque bricolage of forms redolent of Francis Bacon weaves itself into a featureless head through a series of threads and openings. This harrowing composition from Kosh’s ‘dark period’ is clearly an explicit comment on his earlier artistic life. Kosh has described the Soviet artist in the 70s and early 80s as leading ‘a double life’. If the Soviet artist wanted to develop artistically by producing large-scale works, he or she had to do this through a rigid ideological framework; by the seventies, Kosh says, he and his contemporary artists had ceased to believe in this ideological basis. Thus their artistic development has to exist in the context of a ‘double life’. Another work that seems to comment on this frustrating situation is ‘Argument’ (1990). Here two distorted faces grapple with one another at the lips is a strangled anti-kiss, above which a strangely draped, faceless Christ figure cocks its elongated headpiece to the right. Again, there are shades of Bacon about the way the human form is morphed, but also of Picasso in the use of rotation and angular structure. Picasso has, in fact, a strong presence in Kosh’s work, particularly the portraiture – ‘E. Balikova’ (2000) and ‘Tanya (II)’ (2004), are good examples of this. But this influence never overshadows Kosh’s own, intensely personal use of space, colour and iconographic reference; indeed, Picasso is best seen as a stylistic reference point, rather than an overbearing influence.

Perhaps the most poignant of Kosh’s state-sponsored work depicts the hero of Ostrovsky’s stridently propagandist novel, Born By Storm. This autobiographical novel tells the story of the author’s personal struggle with debilitating paralysis, leading to recovery and redemption as Party scion. Solzhenitsyn in reverse, if you will. Considering Kosh’s incessant trouble from an unsuccessful operation, this illustrates perfectly the Soviet artist’s double life. State-sponsored redemption and personal regeneration must have proved the bitterest of pills for Kosh to swallow at that time. And the work itself has a telling emotional duality to its composition. Whilst the central figure has his hand outstretched in a gesture of inclusiveness and charity, the figures surrounding him cower, and, behind the central group another figure strains to control his horse with deliberately ill-concealed difficulty. Other similar works include a stained glass window for a hunting shop, depicting, well, a hunting scene – but including a sallow self-portrait; and a school mural depicting the heroes of Pushkin’s tales. An interesting feature of these works is the figures at the margins of the composition, who often seem to be fleeing from the edifying centre, their state-approved rococo drapery trailing behind them. The effect is subtle, yet powerful – rather like that of the marginalia of medieval manuscripts, where ostracised and deracinated figures were depicted in stark contrast to the lofty religiosity of the central text.

The theme of escape and of flight alluded to in the margins of the ‘monumental’ art is fully developed in the work featured on the cover of this Naked Punch issue, ‘Fear’ (2003). The use of colour in this piece is typical of Kosh’s considered mature style: subtly emotionally balanced so as to give circumspection to underlying passion. But what is perhaps most salient about this complex, searching statement is the way in which the drapery falls behind the figure as it flees. The use of drapery to create a sense of emotional urgency is a mainstay of Soviet art: a bizarrely rococo stylistic tic which been plastered with abandon from fountains in Prague’s old town to pediments in Vladivostok. As Kosh’s figure flees, divided globe-like orb in hand, the tired stylistic mantle of its ideological ‘duty’ falls behind it in the form of a discarded cloak. But the figure is not quite free. Onto the head of the figure clings a final piece of drapery, perhaps as a tribute to fearful memories that are impossible to forget.

If the emotional crassness and formal stagnancy of Soviet Realism have been described by David Caute as ‘Tchaikovsky in the steel works’, then perhaps it also creates a guilty Tchaikovskian dilemma for artistic honesty, as it requires the artist’s true muse to be sublimated into another, more socially acceptable vehicle. Kosh himself illustrates this tendency with another, more potent allusion, to a novel by Vladimir Orlov. The protagonist, a viola player, called Danilov, glances up to the ceiling of a rococo (!) opera house in which he is playing, and he his gaze rests on the chandelier. Suddenly he thinks of the plight of Damocles, conditionally revered and theoretically powerful, but yet catatonic with fear at the prospect of the huge sword hovering above him and his throne at all times. Danilov is suddenly seized with fear at the prospect of the chandelier falling down upon him like Damocles. The chandelier illuminates and dazzles, but is also dangerously and decadently bourgeois; its appropriation can only bring retribution to the Soviet artist, can only happen in the context of a fatal fall. And thus the hidden, personal Soviet artist’s muse hovers, glittering, out of reach, dangerous and powerful. Kosh has catalogued his time under this chandelier of Damocles with the unerring eye and angry brush; he has celebrated his freedom from this impasse with wit, circumspection and engagement. The future? Kosh responds with a typically relaxed focus: ‘each picture is, in itself, a new challenge,’ as he rightly points out. And this is precisely why Kosh’s work is so satisfying – whilst it encompasses eloquent comment on monumentous social events, his work loses no internal aesthetic interest and personal humanity, each work its own world of emotive forms. Critics with caveats beware.

But it doesn’t matter how hard you work if nobody ever sees it,  as the exhibition is nothing without the viewers.   Thanks to those who come. 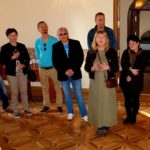 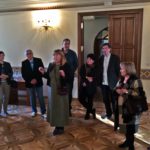 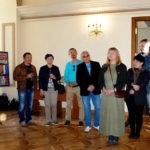